Why I am avoiding the acronym “POC” in my IoT projects?

Why I am avoiding the acronym “POC” in my IoT projects? 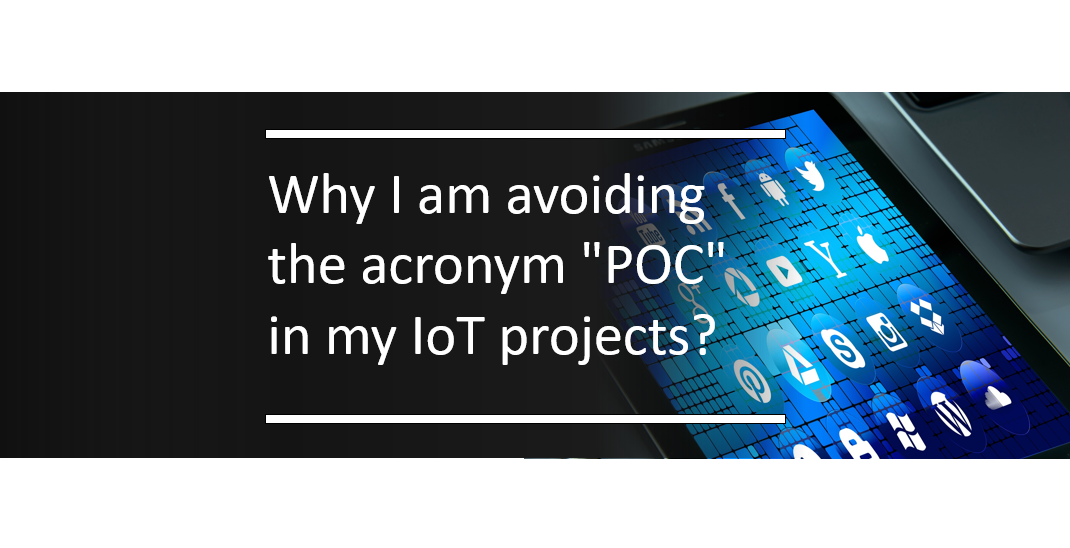 Over the last years I’ve been confronted with a lot of POC’s, but were they really POC’s?

Just like “everything is IOT”, also the term “POC” is loosely used and could unintendingly undermine a perfectly good project scope.

With POC standing for “proof of concept” it is usually interpreted as “proof that the concept works end2end” – so almost like making sort of a blueprint for later roll out,

But, is that really the stage companies are in when launching POC’s?

That is exactly the point I’m trying to make.

A POC means something different for each IoT project and each stakeholder. It’s an idea as much as it is an acronym.

In addition to that, IoT projects are often long and sometimes messy.

Do you really want to add possible misinterpretations?

So, what is there to misunderstand about a POC?

In its core, not so much…

Keyword in this wiki-description is “feasible”.

Thing is that, in order to define if a project is feasible, you need to have a view on all IoT building blocks.

As next step you need to test or evaluated all blocks and bring them in balance. This includes the all services to integrate them AND all the elements to keep them integrated.

Timing versus “promises of feasibility”

As POC’s (only in name) are often done in the beginning of a project,

often while testing only a narrow part of the IoT spectrum,

they usually don’t provide a “yes” or “no” on the feasibility question.

So inherently promising, by using the acronym “POC”, that you will be able to make a statement on feasibility (while you probably can’t), is not necessarily the best strategy.

Because… technically everything is possible.

There is so much wrong with the previous lines that I will not even start explaining.

So, back to the POC.

Think about what the acronym “POC” means for your internal and external stakeholders before you use it and if it is really a proof of concept that will determine the feasibility.

While for yourself the purpose of your POC is clear (hopefully), this is not necessarily the case for everybody.

So, don’t loosely use the term POC but rather describe what you “exactly” plan to do.

It will make everything clear for everyone and will set expectations right.

IoT is already complex and using terms that have a loaded connotation, in a wrong context, doesn’t really help making it transparent.

if you can then even put it in a project context, with previous and next steps.

Jumping back to “feasibility”

You will need to balance a number of operational and functional building blocks, certainly if you want to be able to answer the feasibility question; How will we set up support? What with warranty management? What with change management? and so on.

These components, not only have impact on your TCO, they might even define your total solution architecture.

Feasibility includes all these questions, it balances hardware with functionality, maintenance with security etc.

You are often allowed to do one or two POC’s before people lose trust, while critical component testing can even bring you more credibility with each time you do one.

It’s all in a word and perception still means a lot.

We use cookies on our website to give you the most relevant experience by remembering your preferences and repeat visits. By clicking “Accept”, you consent to the use of ALL the cookies.
Cookie settingsACCEPT
Manage consent

This website uses cookies to improve your experience while you navigate through the website. Out of these, the cookies that are categorized as necessary are stored on your browser as they are essential for the working of basic functionalities of the website. We also use third-party cookies that help us analyze and understand how you use this website. These cookies will be stored in your browser only with your consent. You also have the option to opt-out of these cookies. But opting out of some of these cookies may affect your browsing experience.
Necessary Altijd ingeschakeld
Necessary cookies are absolutely essential for the website to function properly. This category only includes cookies that ensures basic functionalities and security features of the website. These cookies do not store any personal information.
Non-necessary
Any cookies that may not be particularly necessary for the website to function and is used specifically to collect user personal data via analytics, ads, other embedded contents are termed as non-necessary cookies. It is mandatory to procure user consent prior to running these cookies on your website.
OPSLAAN & ACCEPTEREN